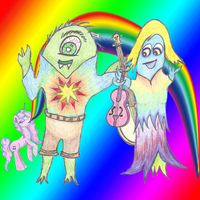 From the recording Bliss with an Attitude

written by Richard and Maureen Hall

Preacher preachin’ at me, waving bibles in my face.
Saying I’m going straight to hell, if I don’t change my wicked ways
Says God don’t care for my kind, no not one bit.
My immortal soul, he says, in a world of trouble.

I don’t know nothing, I said, that much is true.
But I’m pretty sure, I can say the same thing about you.
You’re just speculating, about the ways things should be.
I got my own thoughts, here’s what I believe.

God’s for the straight folks, Gods for the Gays
Else, why the hell would he make them that way.
God don’t care who you’re for, he’s for you anyway,
That’s the reason I’m inclined to say

God’s for the hippies and God’s for rednecks,
God’s for baby boomers and Generation X.
God’s for the losers and winners of the game.
In God’s eyes we all look the same.

There ain’t no country that God likes the best,
Don’t matter how much you holler and beat on you chest,
God don’t give a damn who you kill in your wars,
God’s for peace and loving, that’s one thing for sure.